Google "Where the internet lives"

Google recently showcased their slick datacentre with these detailed views, Steven Levy of Wired has an article here  and there's fabulous photos from Connie Zhou

Whilst Privacy comes with a big P in Google they do engage with the industry over best practices, providing an amount of best practice information on;-  Measuring efficiency |  Servers  |  Temperature control | Water and cooling  |  Recycling


See how an email gets from A to B

We are delighted to congratulate Des Donnelly on becoming a Google Apps Certified Sales Specialist.

Des has over 20 years internet experience and even remembers trawling the early net with Gopher and then Mosaic, the very first browser...   :-)

About Memeonics
Memeonics Ltd is a company based in Co Tyrone, in the North of Ireland. We focus totally on the best and most cost effective solution and have the experience and expertise necessary to be able to advise clients across the full spectrum of internet technologies. We are Google centric ! 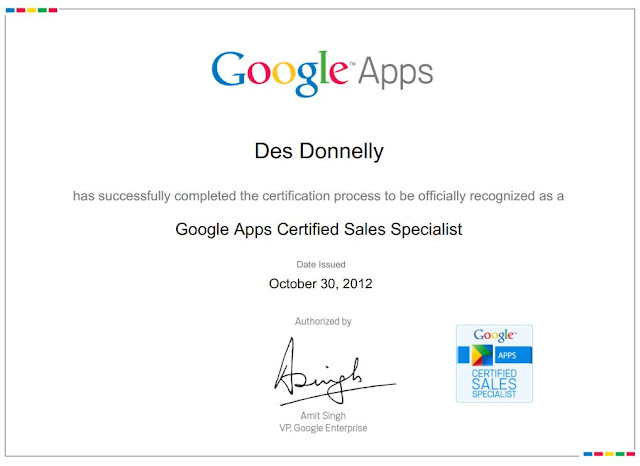 Inside a Google Data Centre !


California governor Jerry Brown signed the bill, "SB-1298 Vehicles: autonomous vehicles: safety and performance requirements" The Bill was signed on Sept 25th at Google HQ in Mountain View. California is the third state in US taking steps to make driverless cars eventually legal on roads and highways (not just for testing purpose).

On a serious note driverless cars will revolutionise the lives of thousands and thousands of people who cannot drive for various reasons. People like Steve Mahan...


I have to say I'm with David of Oak Grove, OR on this, he said;- "Can't wait! I'll feel much safer when people who are texting, phoning, eating, web surfing, and putting on makeup, aren't in the driver's seat."

Volvo are also in this space... in this frame it is interesting to note that the passenger is watching the road <g>

Even the political campaign managers are getting in on the act...

Apps for Business users simply log into their dashboard, you know how to do this, right ?

3. Scroll down to "Phone Support" and note your PIN (which changes from time to time) and the Support telephone number and away you go... 24/7 support ! 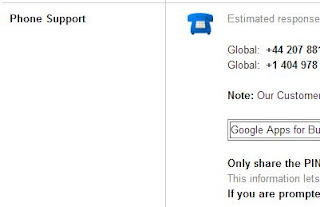